The G10 is a true tube stereo compressor based on the classic variable-mu principle. This method – controlling the gain by altering quiescent current in differential tube pairs – is much faster, but also significantly more complicated than the optical method. The speed of gain-change is primarily why the vari-mu principle was widely used in early broadcast limiter devices such as the Fairchild 670 or the Universal Audio 176, but the sonic byproducts of this topology are the main reasons why it is so loved today.

The controls on the G10 are as follows:

The “Input Level” pot is positioned right after the input transformers, thus allowing you to control the input level, the “drive” for the compressor.

The “Threshold” controls at what level the compression will set in. Turning counter-clockwize will select a lower start point, resulting in more compression. When turned fully clockwize, the compression is deactivated.

The “Ratio” controls the amount of compression in relation to changes in the input level, that is, for the part of the signal that exceeds the threshold value that is set. Setting Ratio fully counter-clockwize will deactivate compression.

The “Attack” controls the time the compressor takes to react to a rising input level.

The “Release” controls the amount of time it takes from the input signal falling below threshold, to the gain reduction being returned to unity.

The “Output Level” potentiometer controls the signal level to the output driver stage and the output.

The “Bypass” switch bypasses the unit completely. The hard way. – A relay simply takes out the active electronics and shorts the input to the output connectors.

We further developed the original G10 into the G10/Hpf version, which is now the only version we build – this allows high-pass filtering of the controlling sidechain signal – allowing more compression to bass-heavy material without generating excessive pumping artifacts. The selection of sidechain highpass is brought out as three extra steps on the “Bypass” switch, giving cutoff frequencies of ca 80, 160 and 300Hz at a soft 6dB/oct.

At it’s interface, the G10 is floating, transformer balanced on both in- and output. Input impedance > 10K Ohm, output impedance < 1K Ohm.

This compressor is based on an extremely minimalist true-differential audio signal path from input to output, using very (very!) tightly selected PCC189 (7ES8) remote-cutoff dual triodes for the VCA stages, and E88CC (6922/6H23n) low-noise triodes as cathode followers for the output stage drivers. Both tube types are still fairly easily available throughout the world.

Review of Gyratec G10 (old version with different metering) from “Resolution Magazine” May 2003: 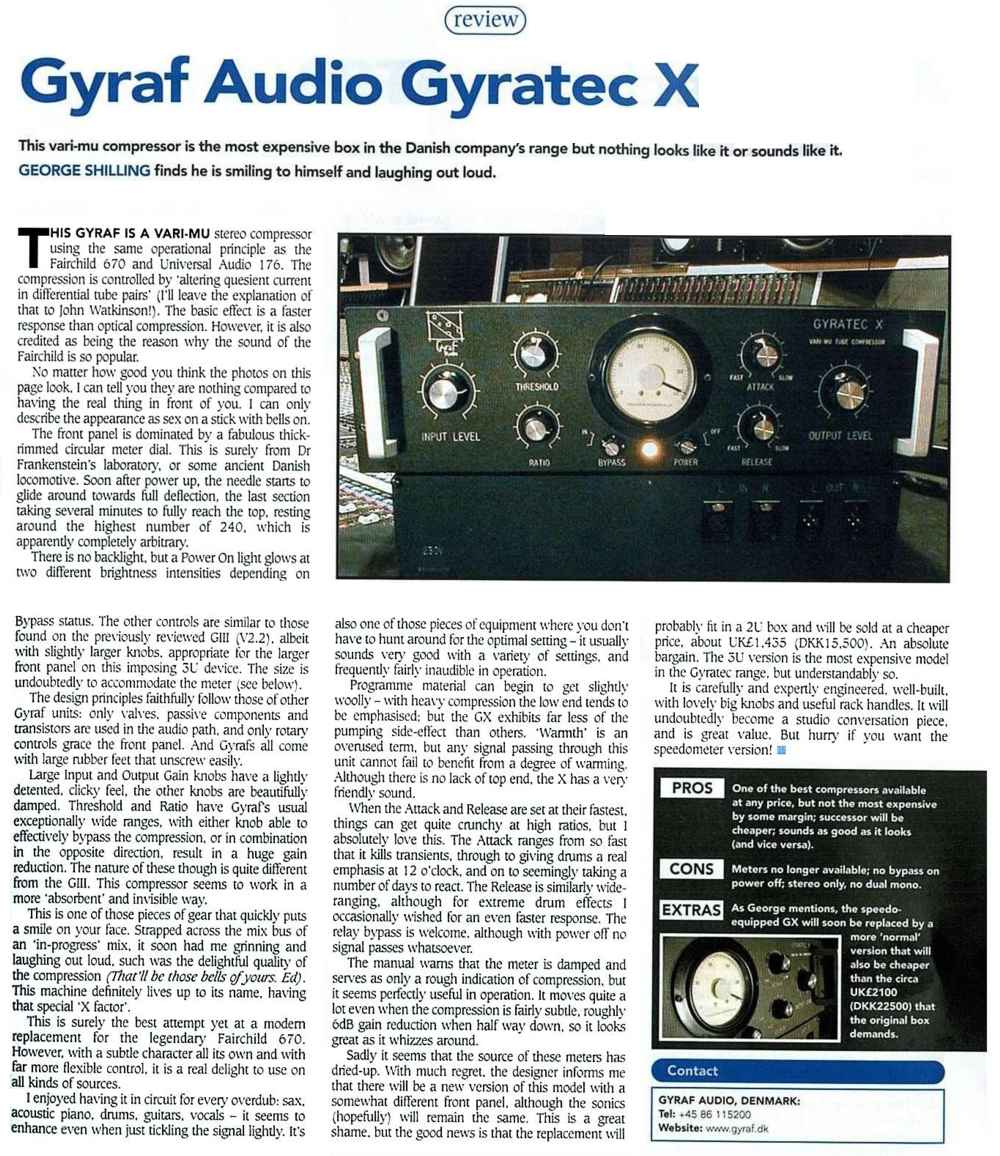